Cor - that was hard work!

Today is a beautiful Bank Holiday Monday. It should be a pleasant day relaxing.

One of the chores which has been waiting since last winter is repairing the roof of the garage. Water has been running down the inside wall when it rains heavily, which is not a good thing. Especially as it is leaking down the wall next to the washing machine. So B said he would fix it and today is the day.

Have you any idea how expensive lead is??

I am hoping we get something for the lead flashing we have taken off, it must have scrap value otherwise people wouldn't steal it from rooves, so that may offset it a bit.

We have done most of it today. The tiles have been taken off, so have the battens and the felting. He put new membrane on, put insulation in, put the felt and the battens back on and then put the tiles back on. Some of the ridge tiles are so full of cement that we will have to buy some new ones tomorrow and finish them, put on the lead flashing and then we will have a waterproof garage.

Brian is now having a lie down and a rest and deserves it. It was really hot on the roof today. He nearly fell through at one point when he lost his balance which was very scary, but fortunately caught himself on the beam.

I am beginning to feel like the woman in Up Pompeii who runs around saying 'Woe, woe and thrice woe!

I took my laptop to the library today and it picked up the internet signal.

I came home and tried here - nothing.

After a while of doing other things I phoned to the ISP to talk to them again and .... I got an internet signal.

I came downstairs and started doing things and 10 mins later lost the internet.

It is a very intermittent fault, so off it goes back to the shop on Saturday.

I'm trying to think of some brighter news but its all a bit gloomy at the moment.

At least I am not in Pakistan or down a mine in Chile. All pretty trivial by comparison.
Posted by Helen at 6:57 PM 1 comment:

And today I find out that I need a new bit for the exhaust pipe on the car.

Thank the lord there is only a week of August left because it is proving very expensive.

August is supposed to be summer which should be warm and dry.

I must go and greet the builder who is coming to give me an estimate for the kitchen ceiling.
Posted by Helen at 6:02 PM 2 comments:

Hopefully this is the third and final one.

The fourth gas man found a miswired plug which has now been fixed and the heating is working. Hurray. However we are going ahead with the flushing out of the system as the chemicals are already in there and it will make the system run better when it is all done.

However yesterday B phoned to say that there was a leak under the bathroom sink which had made a lovely mess on the kitchen ceiling. Great! We are insured for plumbing problems so the plumber arrived and sorted out the leak in the afternoon. Looking at the ceiling though we decided we would have to claim on the household insurance to get it fixed as it is beyond a touch of paint to cure. Another £100 bites the dust for the excess.

I got my laptop back this afternoon and although it had been working fine for them, it isn't working at home. I could spit!!!! They replaced the keyboard though because it has a recognised fault so it looks lovely. I shall have to phone them up tomorrow to ask.
Posted by Helen at 7:47 PM No comments:

Although we are having to use the immersion heater to get hot water to have showers etc, the same is not true for the dog.

When we first got her we tried the warm water in the sink type bath but she is a bit too big, and a lot to agile. So we did the hose in the garden bath instead.

She is visiting us for 2 weeks while Kate and Carl go off to Italy on holiday (nice!), and last night I decided she was too smelly to share the couch with. She was very put out by this, but as I had done my ironing and it was on the couch too I didn't really want smelly dog next to it.

So this evening when I got home she had her bath.

Someone call the RSPCA!

However she is now nice and clean and dry, smelling pleasantly of Herbal Essences instead of dog. She had a jumbone as compensation, so she is reconciled now.

The second one left us spare fuses. One went yesterday, we replaced it, and then this morning it was off again. Replaced the fuse and half an hour later - it was out.

It is a process of elimination, so he didn't repeat what the previous 2 had done. The problem lies in the pipes being clogged up with something called magnetite (sounds like something from Superman to me) but the magnet stuck to a copper pipe so clear evidence of metal inside there. This causes the system to get clogged up, get too much and too little air, etc etc. The bad news is the cost to fix it.

It has to be flushed out which apparently takes a full day, two weeks after the chemicals are put in. The guy is going to replace the electric thing anyway, but I have decided to go ahead and get the job done by British Gas, because although they will cost more (the engineer said that) they then give you a lifetime guarantee on it. £700.

The laptop went into the repair shop yesterday. The guy in the shop said I had done all the things that he would have done to eliminate possible causes of the machine not connecting to the internet. Needless to say it worked just fine for him. Having not worked all last week - at home and at a wifi spot - Friday night it worked! The threat of going away was clearly sufficient.

However I have sent it away for a diagnostic test. The most obvious cause is a poor connection to the airport chip. Hopefully that isn't expensive to fix. On the plus side there were little chips on the keyboard which is a known fault, so they are going to replace that anyway.

I bought the wrong replacement switch. The one I should have got (and now have got) was £2.50. The wrong one was £15. I wonder if Focus will take it back????

I had an early start today. Nic was in the Vale of Glamorgan show - the first class and the last class. So to get there in time she got up at 4am, but to get there to take pictures I got up at 6.15. Sadly the judge in the Race Horse to Riding Horse didn't like young horses because he put a rubbish horse who was 15 above Five. Even I could see that the older horse needed a lot of work to make him anything like as good as Five. As we came out a group of people said it was a disgrace because he should have been in the top three. That was nice of them, because they weren't prejudiced in our favour.

I then went to work, and went back to the show late afternoon. Nic and Five were in the Hunt Scurry. This is a race over a twin course, with teams of 4 horses as a relay race. 2 teams go, then another 2, and then the winning 2 go against each other etc. It is always good fun, though annoyingly Five refused a fence and the Vale Hunt came last - oops.

They were lucky with the weather as it has been a beautiful sunny day, a bit windy, but lovely. Which, as it has been raining heavily for the last week, was very very lucky,.

The electrics for the heating went on Sunday.

Yesterday the pull switch for the light went in the bathroom.

We are awaiting the third thing with trepidation.

The problem was with the electrics and he spent a good hour or two finding where it was shorting and sorting it all out. However it was all done by 11.00.

Then we went to look at Nic's horse box. It is old and the exhaust is going. Actually, once Brian had crawled under it, he discovered it has gone. It is so old that you can't just buy a new exhaust for it, so Brian has bought some zinc and we have to go and buy some other bits to fix it till the MOT in March (not very hopeful on that one)

After that we went to the tip to get rid of the fridge and freezer which were surplus to requirements plus some other stuff.

The I sorted out all the stuff from the airing cupboard on the basis that as I had emptied it for the gas man I might as well sort it out. So we now have a bin bag full of old towels etc for the dogs home.

I came down yesterday morning to find a note from Adam saying 'no hot water'.

Our boiler has been cranky and not always turned itself on by itself when it should, but the new controller which was fitted 6 months or so seemed to have solved that problem. However I went upstairs assuming that was it, and switching the thermostat on the boiler would trip it into action.

There were no lights on the controller at all.

It is a deceased controller.

No hot water in the forseeable future then! Thinking of no shower and no hair wash, this was dismaying. However, phoned British Gas to get them to come and fix it and they said they would come in the afternoon.

During this Brian had a good look and found the plug for the immersion heater ( I wasn't sure if we had one or not) and plugged it in.

Hurray for shower and hair wash.

However the gas man didn't come yesterday afternoon, and the phone call I got said he would come first thing this morning , hence I have been up and dressed since 8.00 waiting for him (hasn't come yet at 8.45).

But there is something a bit strange with the electrics for the immersion heater because when we plugged it in again last night so Nic could get a hot shower it blew the trip switch. Task for Brian today - look at immersion heater. Also she couldn't get at her bed so had to sleep in the spare room.

The unexpected keeps you on your toes doesn't it?
Posted by Helen at 8:40 AM 3 comments:

I have come to the conclusion that my laptop is poorly because the internet problems go away when I stick the ethernet cable in (like now) so I may have to take it to be looked at. Ouch. 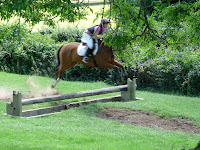 This is a picture I took on Sunday of Nic riding a headless horse. Clever of him to jump the fence with no head, eh?

I took some proper pics which are on Nic's facebook page, but this one made me laugh after I saw it.

B is back in Llantwit and here for August until his official retirement. I have had to make room for him to put piles of shirts etc into the wardrobe, which has been a challenge, but which has been achieved.

One of my colleagues has her daughter's wedding on Saturday and we are going along to the church to see and sing. I am looking forward to it. Everyone is hoping for sunshine for them.
Posted by Helen at 7:35 PM 1 comment: