Hamlet on a Bank Holiday

Yesterday we went with some friends to see Hamlet in the open air at St Donats Castle.  The production was the Globe touring company(more info here).   We got there early and had a picnic supper for which Chris had done smoked salmon salad sandwiches, chicken and salad, and I had done fresh scones, clotted cream and strawberries.  It was really lovely.  We were so lucky with the weather because it was mild, actually quite warm and (trumpet blast here) dry!!

It was set on the top lawn with the castle behind (Bradenstoke Hall and Lady Anne tower for those who know the place)  on a very basic stage which must have been similar to those used by Shakespeare's players when touring outside London during times of plague.

The production was very straightforward as you would expect with an open air play - there are few opportunities for great subtlety when trying to pitch your voice to the back of a very large lawn.  There were about 8 actors and the doubling was very well done with changes of coat and hat making a more than reasonable difference.   We were sitting quite a distance away but I could hear everything well, though Chris has a bit of a hearing problem so she couldn't hear much.

We had all taken added layers of clothing so added jumper, then coat, then blankets as the evening got chillier, and gradually darker.  By the end of the play the bats had replaced the swallows eating the midges and you could hear an owl in the forest, and the sea  from down the hill which made it really quite magical.

Earlier in the day we had gone to the Flower Festival in St Illtyd's Church which was, as usual , lovely.   That was after a walk down to the beach

I haven't blogged for ages, because there has been nothing much to write about. I have been going to work, coming home, doing stuff round the house, etc etc.  Life as it is lived most of the time.

There have been minor family crises - Nic's car needing over £1000 spending to get through the mot despite it being the newest car in the family for instance, but nothing to write about.

So is there a point in the blog?  Not really because only family read it, but although I started it to see if I could keep it up for a year, I actually enjoy doing it, so although sporadic, will continue with it.

Things happening in my life are mostly about work and family, because that is what takes up my time.  I am a bit peeved that the new agreement about pensions which means I won't be able to retire till I am 65 instead of 64 ( which is when the state pension kicks in).  B will then be 69 and it does seem to me that after 70 there is often less ability to have a completely full life as one gets creakier and less able to do things , so that is a potential disappointment.  But as B is having such a good time writing music that even if I was retired I don't think we would spend out time doing lots of stuff anyway.

I have a new guide dog in training for August, called Mr Jeeves, and he is a lovely dog.  I have had Saffy for the last two weeks as well because Kate and Carl have been on holiday, and the two dogs have gotten on very well, especially as Jeeves is so young and wants to play, but he learnt on day one not to pester her.   This week he is on his own at night and I think he is really going to miss Saffy.  She, on the other hand, won't miss him at all!

He may be the last guide dog I get because the trainers are  emigrating to New Zealand, and there won't be any trainers living in LM, so that would be sad, as I have enjoyed the two I have had.  However I have decided that the ideal size for a dog in a normal house is Saffy sized, not labrador sized.  He takes up way too much space in the kitchen and he really, really moults!  My black trousers are staying in the wardrobe until he goes!

I am looking forward to going to Hadrian's wall in September, though I haven't got fit(ter) as I had  meant to, so I will have to try to do some exercise in the 3 weeks before we go.  Otherwise I will be trailing in the rear!  Also we took Jeeves for a walk in a heavy shower today and both B's and my cagouls leaked so we were soaked.  We need to waterproof them before we go! 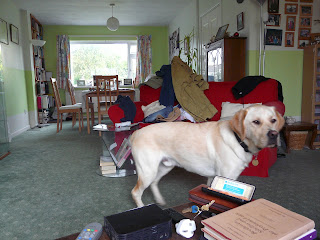 We went to the National Eisteddfod today.

This is a cultural event organised every year in Wales and it moves round the country every year and this year it is here, so we went.

There are lots and lots of competitions, for singing, reciting, brass bands, poetry, etc etc which go on through the week - all in Welsh and is something a lot of Welsh speakers get very involved with from a very young age.  We just went to look round, get the feel of it, and had a very pleasant few hours.  B attended a talk about some country poets which he sort of understood enough of to make it worth attending, and I trolled round with Jeeves.

Jeeves is the new trainee guide dog, and he was being a bit of a labrador while we walked round, attempting to hoover any food on the floor, but he does get people talking to you.  It was lovely.

I went to see the Comedy of Errors performed by the RSC in Stratford today, Brian and I meeting Boo and Trev at the theatre.  It was brilliant.

The story is basically a farce based around the premise that two pairs of identical twins were separated as babies and end up in the same city.  And it was hilarious.  The actors who played the two Dromios (the servants) were absolutely wonderful, and the actress who played the wife of one of them was equally good.  There is a bit towards the end where she is describing all the mix ups of the day to the Duke which was a tour de force.  The timing and the use of changes of tone were so expertly done, and the timing thoughout - superb.

We laughed and laughed.  But the director had also given it a darkness because Ephesus (where it is based) had a Duke who will put to death anyone who comes from Syracuse (where the twins father comes from) and the father is at threat of death through the whole event, although he is saved at the end.  By setting it in a modern location, and making the threat of death real it gave an additional depth to what is otherwise a very light play.  It was very effective.

Then we went and had a cream tea which was excellent.

Now we are home and I have a glass of wine, Brian has a beer.  Brilliant.
Posted by Helen at 9:29 PM No comments: