The news is full of the Olympics.  I am not sporty and have no real enthusiasm for them, but I do appreciate that lots of people feel very differently.  However spending so much money  during financial crises seems lacking in balance.  I would personally prefer to see more useful things done with the  money, like reducing the public sector cuts, improving the rail network across the country, improving sports facilities at grass roots level, and so on and so on.

I said I would be more cheerful, but that all sound a bit glum - well, negative at least.

It is hard to be positive while watching the news though.  Doom and gloom everywhere.

However L'Oreal have had their wrists slapped for airbrushing photos of Julia Roberts in magazines - hurray.

The weatherman is now saying that  it is going to be warm and sunny.  Hurray again.

Tomorrow is my birthday - double hurray.

Shame I have to go to work, but there will be cake.  (we won't think about the diet starting next week)
Posted by Helen at 6:29 PM 1 comment:

I went to another funeral today.  A friend who was in in the same choir as me lost her fight with breast cancer and the church was full.  She sang in three choirs, was active in church, a keen golfer and people from all those places were in the church, as well as friends and family.  it was a fitting tribute to a lovely woman who died far too young, only 68.

We have had a lot of funerals recently.  My cousin died last week, though sadly I'm not going to get to that funeral.  B went to the funeral of an older friend last week.  It does focus the mind and make you appreciate things more I find, the impact of a funeral is to bring home to you that life can be fragile and we need to make the most of it.

There are things I would like to change - I would prefer B to be living nearby instead of 2 hours away.  I would prefer some friends to be a lot nearer than they are too, but I suppose that is the rough that comes with the smooth.  At least they are they are there.  For which I am heartily glad.
Posted by Helen at 8:20 PM 2 comments: 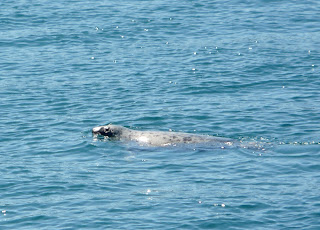 We went for a walk near St Davids on Saturday and did very well on the wildlife front.  Here is a grey seal who was lazing around in the sea on a lovely sunny afternoon. 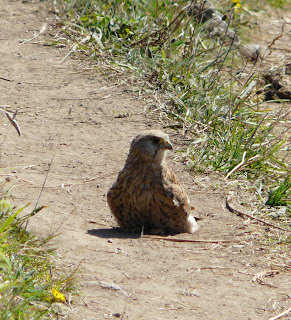 This kestrel was having a dust bath.  He continued having his bath even when we got fairly close (not this close - I have zoom on my camera) and then he started walking down the path towards us before he took off. 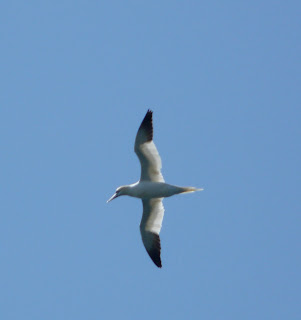 Here is  a gannet. I got lots of pictures of sky while trying to get a decent picture of the gannets but did get the picture in the end.

What I didn't get a picture of was the most exciting bit.  I have been trying to see dolphins or porpoises off this coast for years and never have, though B has seen them a few times.  However I saw one on Saturday.  Not a lot of one - all you see is when they surface to blow so it is just a small little bit, but I did at least see one.

We had a lovely day on Saturday, then Sunday the clouds sat on top of us so that though it wasn't actually raining it was very wet, so we stayed in and read the papers instead.

The Guardian is being a little bit smug about the phone hacking/News International scandal as they have been going on about it for years, which is understandable.  It adds a bit of humour to reading the reports though.
Posted by Helen at 6:47 PM 1 comment:

First I was on  holiday.

We had a week in East Anglia, went on the Broads, visited lots of people and did lots of things (of which  more later)  We were busy and didn't have internet in  most places, so no blogging then.

Then when we got home we discovered that the phone line was dead.  My line is provided by Primus, who are very cheap, but.....

To contact them you need to use a mobile because - the landline is not working - and Primus took nearly 20 minutes to get me to a person to talk to, all the while playing the most godawful version of 'Love Story' which in itself is enough to put you in a bad mood.  The mobile obligingly ticks up the seconds so you can see how much the call is costing which is also annoying.

However we managed to get through and made an appointment for Wednesday  morning - when I thought Nic was going to be here.  However it turned out she wasn't so I asked Ad to take the  morning off because I couldn't get out of a meeting I had.  He got permission.  Fine.

But the engineer didn't come.  Wednesday afternoon I spent another 15 minutes waiting to get through to Primus and asked where the engineer was and was told the appointment was for Thursday afternoon.  We then had a very heated conversation, during which I suggested that they played over the phone call I had made on  Monday when the Weds appointment had been made because they kept telling me that the appointment was for Thursday.  They told me they had phoned.  I did have a missed call at about 6pm on Tuesday evening but I didn't know who that was from and even if they had left a message the evening before is not a reasonable time to change the appointment.  I was fuming and asked to speak to a supervisor  - after 10  minutes the operator came back to tell me the supervisor was busy and couldn't talk to me!  Why did that take 10  minutes????

I shall be looking at alternative providers I think, even though Primus are cheap.

However the engineer came this afternoon (I took time off this time) and has fixed it.  Hurray.
Posted by Helen at 8:29 PM 1 comment:

It is odd the way attitudes to child care change over time.

We have tended to be appalled by the upper classes in earlier centuries who entrusted the care of the children to nannies, and seldom saw the children when they were young.

However is that so very different from what is happening in the Western world now?  Many women go out to work when the children are very young, still babies and 6-9 months.  Sometimes it is choice and sometimes necessity.  Some careers won't permit a career break eg medicine (though doctors in general practice can earn more part time than most women working full  time for a couple of years, but still).  Some women need the fulfillment of going out to work with adults and are not cut out to be a full time carer.  I initially said 'parent' but they are always full time parents whether they are the ones doing the full time child care or not.  For others it is just money - we have created a society where it is necessary for most families to have both parents working in order to make ends meet.

There are choices of childcare, but it must be really hard to leave a very young baby to go to work.  Whether you have a child minder, a grandparent or a nursery it must still be do heartbreaking.

My youngest was 3 when I went back to work, and I didn't want to go.  We needed the money, so it was necessary.  I was lucky in many ways because we had a combination of a childminder/babysitter (unqualified) who came to the house.  She picked the kids up from school and looked after them till either I or their father got home.  We had backup with my mother  nearby who could step in sometimes for emergencies, so they were in their own home, and had continuity of 4 principal carers.  It was also cheaper as it happens.  But although they seemed fine about it, I would have preferred to stay at home till they were older.

But are we doing what we criticised the upper classes for doing - rearing our children at a distance?  The reasons are different, but are the results the same?  Or are they worse?  At least a nanny gave one person in the home, whereas nurseries give a variety of carers.  Are we creating a generation of kids distanced from their parents and in the process altering the relationships between them?

Or is it something that has happened in a variety of ways over the centuries, and this is just the latest version?
Posted by Helen at 9:03 PM 1 comment: