We use a self issue system in the libraries made by a company called Bibliotheca, and they are having a one day forum in London on Tuesday next week which I am going to attend.  This would usually mean getting up at 5am to catch the train, but instead I am getting an overnight stay in a hotel, which is very nice.

The reason being that we also use a system called Netloan which is used to manage pc bookings, lots of libraries use it.  However we have put Netloan onto the self issue kiosks, so that borrowers can book a pc themselves, and it is also tied into the printers, so that people can manage their own printing payments .  We are one of the few libraries using this at the moment, so they got in touch to ask if I would do a 10 minute presentation about it .  I agreed, and they said they would pay the train fare and for a hotel too after I asked.  All for just 10 minutes.

The slight problem that I know almost nothing about Netloan was fairly quickly solved by a crash course.

We walked all the interesting middle third of Hadrian's Wall which - for me - was a real achievement.  I feel proud of myself.

All family well and thriving which is a major plus!!

Rejoined NWR which I am really enjoying

Got flooded over Christmas so are leaving our offices behind.  This is sad, because 4 years after we returned (after the last flood) we all still looked round and thought how lovely the office was.  We are now in the basement in a very small room and will turn into troglodytes (dry ones though)

Sad shortage of sun all year. 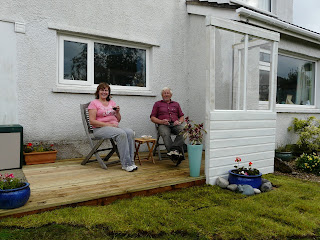 We built what we are calling the servatory on the back of the house ( half a conservatory) which does also have a canopy.  I wanted it because the garden is windy, so it is a wind break which still get sun.  We actually did use it a lot and it makes a big difference.

Still want some sun though.

B will have another piece performed by the BBC (hopefully) and another piece recorded in June, followed by a cd.  This is very exciting.

There are horrific spending cuts - why do they call them savings?  - coming up for the local authority I work for and libraries won't be immune.

B is going to be a grandfather in a few weeks

We have some concerts planned.

Roll on 2013 and I hope everyone has a good one

Dagger's at the ready

The nominations for Dagger in the Library begin now - we already have one nomination, and I have never heard of the author which is good.   I found some really good new authors last year, so fingers crossed some other good ones turn up this year.

Fudge is going home tonight, and we will miss him because he is a very nice natured and affectionate little dog.  I won't miss the mess though as he chews everything and there are bits of chewed stuff all over the place, and the vacuum has been working hard.

New Year Resolutions - hmm
I want to learn more about wine, rather than buying by guesswork

I will do something with the how to  crochet book I have next door instead of just looking at it guiltily.

Finish the backing up of all the  photos on the computer.

Make a start on scanning the old photos.

I will make an effort to create a course for mylearningworx.  I am thinking of a 'Make do and mend' really basic how to sew, how to hem, stuff like that. It should be a bit of a challenge!

Maybe invent a time machine as well so I can fit in all the above. (Doctor, where are you?????)

We have had a lovely Christmas with all 3 children and one son in law home.  Ad was working on Christmas day so we had a late dinner.  Kate and Carl made a fabulous brunch with Eggs Royale and prosecco, then we had a relaxed day until Adam got home about 2.30.  We then did presents and my very generous children have given me an iPad mini, so I am very excited!  I also got some jewellery, a pretty necklace and some earrings, and a thing to make my iPod talk to the radio. So I did very well indeed.

We have had a visiting dog over Christmas.  A Jack Russell crossed with (we think) corgi so he has a very long body, very short legs and huge bat ears, but he is very cute.  Saffy does not think so, she thinks he is a young pest and is being a grumpy old lady.  He did give me a total panic tonight however.  I got back from work and he wasn't here.  After checking the house I went round the field calling 'Fudge' everywhere while Adam went down the road, and after half an hour of hunting round and now sign of him we were getting ready to phone the police.  However in the meantime Nic had phoned her friend who is a dog warden.  He gave her the number for the kennels who told her he was in Llantwit police station.  When I got there he was delighted to see me and I was equally delighted to see him!!

Our office flooded again.  2008 was the last time.  The new stock was  moved out to Barry library on Monday, and today we spent most of the day throwing things into a skip and arranging how we were going to squash ourselves into the workroom in Barry library.  Ho hum.

We went to see The Hobbit last night.

Pro
Martin Freeman is brilliant as Bilbo, he was born to be a hobbit.  The characters from the previous films  fit well into the new(old) story seamlessly, and the characters they have added from background information and the appendices mostly are good too.  The characterisation of the dwarves work really well too, and they end up being much more individual than they are in the book - as far as I can remember as it is a long time since I read it.

The 3D is great.  I am still so thrilled to be able to see it, and don't understand why I can, but it is great and the depth of the pictures are really quite exciting.

Cons
It is too long.  There is too much of the group being scenic against the scenic scenery.  The scene where they escape from the goblins goes on too long too.  The baddy orc isn't very convincing, and as they are meant to be created by man why are they running an independent war?

The ending is at a sensible place, and I can see the second film, but am still completely at sea about what they are going to do with the 3rd one.

Not as good as LOTR because the story isn't as good, there is less drama, less intensity so it is less exciting.

Spoiler alert -Bilbo doesn't tell anyone about the Ring until LOTR and there is a moment when he almost tells, but Gandalf says something and looks at Bilbo as if he knows about the ring - and he doesn't, the whole point is that he doesn't know until he throws the ring into the fire many years later.  That was annoying

Flood fears are rising with the water levels around us, and we spend an hour or so today lifting 100 or so boxes of books off the floor and onto higher surfaces. Ho hum.  Fingers crossed

Work didn't flood.  The car parks around and the fields did, the road further down did, but we - thankfully didn't.  I am very relieved.

We have left all the boxes on tables just in case though we aren't being rained on at the moment.

An odd and irritating consequence of my ordering splurge is RSI in my arm, which is ridiculously sore today, though why it has waited till after I have had a weekend odd is baffling.  Hope it goes away tomorrow.

Cars can be pricy

My car radio died recently.  Usually you would just either get it fixed or else get a new one fitted.  Not if you own a Honda Jazz.  They have cunningly built the thing right into the dashboard and the fascia panel has the controls for the heater etc in as well, so you can't just replace the radio, and to buy a new Honda radio costs £350 which is nuts!!  So after a conversation with a repair place who looked at the car and went 'oh dear' and told me it would be at least £130 to fix the old one (if they could) I decided to get a new one.

It has been put into the glovebox and it has a remote control so I can at least use it when driving.  Hurray.

B, on the other hand, had a problem with his car, and had the nasty shock of it being £650 worth!  Just before Christmas too.

I have been poor at blogging recently because I haven't actually had much to write about  Life seems to be work, home and work, with some Christmas shopping, some social stuff, but nothing really writable about.

Work - hmm
We are worried about flooding again as it is soooo wet here, and the river near work was over the height pole on Friday so we put all the boxes we had full of books onto tables in case it flooded.  However as I haven't had a text to say I am assuming that it hasn't been flooded.

We are going to be starting a series of training events on how to use eBooks soon so we have put in an application to buy some eBook hardware which means we will have lots of toys to play with while we are working out how they all work.  That will be fun because I am a geek really.

I am spending money industriously because it is getting close to the end of the year and and I have been given extra to spend.  Spending and extra £10,000 sounds like fun, but - actually - it is surprisingly hard work because I have to make sure I'm buying things we haven't already ordered, that people will want to read etc etc.

I have done most of Christmas shopping though.
Posted by Helen at 5:40 PM 1 comment: