I have a cold and am feeling sorry for myself. I hate winter colds. Actually I hate summer colds too.

Also it is really getting wintery in the mornings. The car has condensation on all the windows and needs to be wiped off. The grass is wet and you need wellies to walk the dog. It is cold in the evenings. It is dark when the alarm goes off. Soon it will be dark when I come home.

It has been sunny and pleasant during the day, but I was in an office so I didn't get the benefit.

I am feeling like Mrs Grumpy, so I will go and get some more Benylin cold stuff.
Posted by Helen at 7:57 PM 3 comments:

I have been in the garden painting twigs this afternoon. It does feel a little bit like Alice in Wonderland but am only painting them white to be feature decorations for Kate and Carl's wedding and the roses are left untouched. They are currently stuck into the ground around the garden which does look a bit surreal. It was so warm, warmer than it has been for a lot of the summer.

I had company because Saffy the dog is staying for a few days. She has been a bit poorly recently. Last weekend her back legs went out from under her and she was very unhappy. Off to the vet who thinks it is arthritis in her hip or pelvis. She is on medicine and is much happier now, but for a dog who has always been very springy it is proving a bit tricky to stop her jumping up. She is also on shorter walks so as not to overtax her hips.

I have also decided not to audition for the choir, not because of musical reasons but for commitment reasons. They often do tours abroad and I don't want to commit myself to that because I can't really afford it, and so have decided not to go ahead with it. Sad, but I actually feel the right thing.
Posted by Helen at 7:03 PM 1 comment:

I am taking my courage in both hands and am auditioning for a choir in Cardiff on Monday. I have been singing for years, but have usually managed to get away without auditioning, so I am very apprehensive about it. I have looked at loads of music and can find very little that I like to have as an audition piece. Most of the pieces I know are choral and therefore singing just the soprano line without the other parts sounds very thin and bodiless, plus without the other parts I keep going flat for some reason. Other folk songs and things don't have enough range for an audition piece, they aren't interesting enough and only span about half and octave so they are no use.

Plus I hate listening to myself singing alone - I am very much a choral singer. I don't mind being heard when singing with other people, I can sing my part alone if the rest of the choir is singing, but by myself I get self conscious and don't sing so well.

However the worst that can happen is that I don't get in.
Posted by Helen at 7:37 PM 3 comments:

I am pondering the flower arrangements for the wedding in November and as Kate is having an icy wintery theme I don't want to actually have too many flowers. Lots of arrangements for weddings are very flower intensive, with massed flowers bunched together and not much greenery and although they are often lovely, I don't think they are very wintery. So I have painted some long straight sticks white, white and glitter and silver and they are going to look good with maybe a few flowers inserted. I also sprayed some greenery silver this afternoon and that looks great and would be good mixed with actual greenery and just a few flowers as well. So I need to get a large can of spray paint to do more silver and then think about containers as well. I am having a really good time.

I signed up for a photography evening class which was to teach me all about my camera but sadly only 3 people signed up so the class has been cancelled. I am so disappointed as I was really looking forward to it.
Posted by Helen at 5:01 PM 3 comments:

I am thinking lots of deep thoughts about flowers and cakes for Kate's wedding. We are having a cake of cheese and then fairy cakes. I am making the fairy cakes so on Sunday I made 3 batches of 3 different recipes and have asked the family and colleagues at work to do a taste test which they enthusiastically did, and the majority vote is for the easiest and cheapest of the three, though the next most favourite has the advantage of baking with a very flat surface so they are easier to ice. The jury is still out.

Flowers are the other thing we are doing ourselves, so I have started looking at the websites and narrowing down the actual choice of colours and flowers, then we need to work out how many arrangements we want and how many flowers in each one before we place the orders.

Oooh it is getting really exciting!!

Also the diet is going well. I have lost over a stone in 6 weeks, so it is really starting to be visible now which is encouraging.
Posted by Helen at 6:13 PM 1 comment: 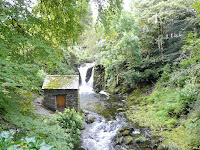 I went up to the Lake district to stay a few days with my sister and her husband in the cottage which they have rented for 2 weeks in Ambleside. It is beautiful there, with small, drystone walled fields, with sheep or cattle browsing, the mountains rising up around the lakes, narrow roads with pretty houses either slate or rendered. It is incredibly picturesque. In September it wasn't too busy, though there were still dozens of hikers around. Up above is a waterfall by Rydal House which was much admired by the Romantics. 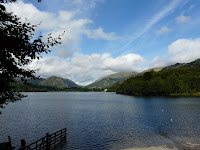 This is Grasmere. The second day we went for a walk from Grasmere back to Ambleside. Grasmere is where Wordsworth spent much of his life, and lots of his family are buried in the Grasmere church (below). We didn't go into his house but did wander around the village for a bit, before going for our walk, and it is very pretty. 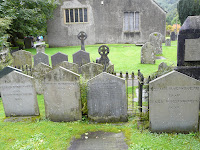 For some reason they pebble dashed the church at some time, which does not add anything to its beauty, and it is a shame because inside it is really lovely, very simple with mediaeval beams and mostly whitewashed.

We had a lovely time, and I felt I had had a real little holiday by the time I came home.

Nic asked me to come up to the stables and take pictures of her horse Fiveaside. Sadly she needs to sell him because she needs to get a new clutch in her car which is going to cost about £900 (!), and needs a picture to sell him in the magazine. As her car is non functional we went in my car, but he has a swollen knee because he fell over while (if you will pardon the pun) horsing around in the field. So she couldn't ride him and we couldn't take pictures. He went into the horse walker for an hour to walk off some of the swelling - he isn't lame - while Nic mucked out, and I read my book in the car. Then she bandaged his leg and off we went.

Nic is turning into a racehorse rehoming centre. Fiveaside is a failed racehorse, but will make a lovely riding horse, and went to Pony Club camp where he had a lovely time. A friend bought another one, gave him some training and has sold him on to a lovely family home. Now they have another one each, to teach how to be riding horses instead of race horses and then sell on to be happy hacking horses. It is quite amusing, but also well worthwhile.
Posted by Helen at 9:02 PM 1 comment:

While not wanting to talk all the time about my diet, nevertheless I am please to say that I have now lost more than 1 stone. I'm not finding it too hard at the moment, mainly because it is working and I really like cold chicken.

It is now showing and my trousers are getting loose, which is a very good thing, although I now have the dilemma of whether to buy more clothes to fit now, when I am intending to lose more weight. I have bought 2 pairs in the sale, and that will have to do for now. I bought one pair which said they were a size 14 but turned out to be a size 18 which was sad, as they were nice trousers and have had to go back to Tescos.

I have also been ripped off by a company called PPW online who advertise on facebook. They say they will take £1.97 from your account to send information about working online, so I agreed to that. However they didn't send the information, and then took £49 out of my account . I am phoning the credit card company tomorrow about it. Very annoying though.
Posted by Helen at 7:20 PM 2 comments: