We had a very musical weekend. On Saturday morning we went to a concert which was part of the Lower Machen Festival. The concert was a violin/viola and piano duo who were extremely good. It consisted of 3 pieces, 2 by local composers who were both present. One of them was like listening to a foreign language conversation - you knew something was being said, but had no idea what it was, though B thought it was crap as well, so I felt that my judgement was pretty justified. The other piece by Peter Reynolds was very pretty, and I liked that. The third piece was by a very well known composer called Hilary Tamm, and didn't seem to have anything much to say at all really. I've heard a few pieces by her and none of them have seemed very special although she gets lots of plaudits they all seem a bit dull to me. The last bit was an arrangement for viola and piano of 6 sections of Prokofiev's Romeo and Juliet which worked much better than I would have thought it would.

We were discussing the number of concerts of contemporary music that we listen to that have unremarkable music in them. We wondered if we were missing the point, or if we were just like the child in The Emperor's New clothes story and were the only ones seeing reality. I suppose that there will always be pieces of well known music that I don't like which other people do (Wagner for instance) and that this is just an extension of that.

On Sunday evening we went to a different concert which was celebrating Tudor music. A Cardiff choir called Cantemus who are very good indeed and Ensemble Hercules (who perform at the Globe) doing a mix of sacred and secular music and it was excellent. The Ensemble played some instruments I'd never seen before eg a cornetto and were terrific. They did a mixture of Byrd, Tallis, gibbons etc and included some pieces by Henry VIII as well, which were actually lovely.
The church benches in both cases however were less than lovely to the backside.
Posted by Helen at 6:11 PM 2 comments:

All sorts of activities happen when the weather is nice. Though having said that these activities would still have happened even if it had been pouring with rain, which is not unlikely in Wales in the summer. 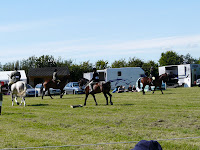 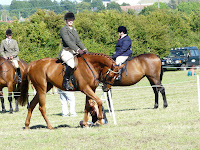 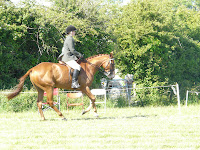 And here is the local Victorian Fair. This is held every two years and people get dressed in Victorian costume. 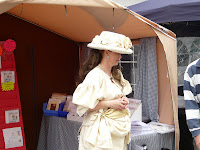 When it first started about 20 years ago lots of the public dressed up, but I noticed on Saturday that not even all the stall holders had dressed up, which is a pity. I think it should be compulsory for the people who take stalls to come in costume. The local supermarkets had everyone in costume in the shops so I really think the stall holders should make an effort. In addition to the stalls there were bands, a bike race, stiltwalker etc. It was great. 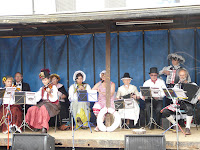 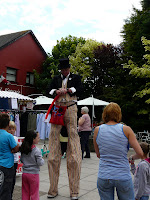 The scenery of Northumberland and northern Scotland is wonderful. Although living in Wales one does get used to beautiful scenery, because it is everywhere, the scale of Scotland and the Northumberland coast are breathtaking. There are a few photos which don't begin to do it justice - even the videos don't do it justice.
This is the view from the mountain next to Ben Nevis 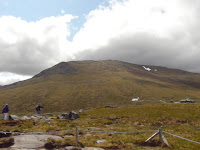 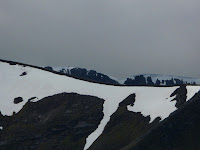 And this is Ben Nevis.


We didn't see the red squirrels which the signs said were around but we did see an osprey hunting when we were sitting reading at the beach at Lossiemouth, which was exciting. 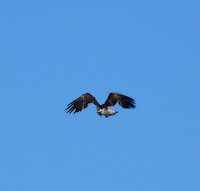 But the deer which stayed and grazed quite calmly and allowed lots of photos to be taken when we were by the loch was a real treat. 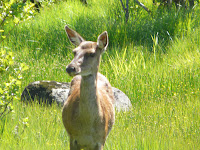 We didn't see Nessie or an golden 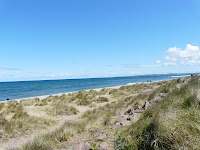 eagle either, sadly. I did have my camera ready for Nessie as we drove the whole length of Loch Ness but not a sign of a prehistoric dinosaur.

This is the beach at Findhorn. The beaches along the Moray Firth are huge, sandy and empty. Admittedly we were there on a Monday and Tuesday during school term time so I expect that it gets a bit busier during the holidays, but I doubt if it ever swarms with people because the beaches are just so huge.
We had two days lazing on the beaches and reading which was lovely after the touring we had been doing in Northumberland. Then when we went to Fort William we found a fantastic walking area, though surprisingly full of Germans - by the coachload actually. However there was still plenty of room for us to walk in peace and quiet (apart from the jets - with RAF bases at Lossiemouth and Kinloss there are rather a lot of jets roaring around). I can recommend Scotland and Northumberland unreservedly.
Posted by Helen at 7:24 PM 1 comment: 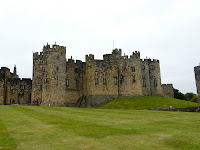 Here are some of the castles we saw in Northumberland. There are lots of them, and many of them are enormous. This area has been fought over by the English and the Scots for centuries and the biggest family - the Percy family, once Earls and now Dukes of Northumberland have been there since the 11th century are still in Alnwick castle and still own it. 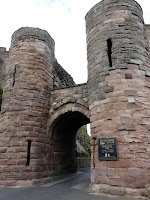 This is Bamburgh castle which has been a school, a hospital as well as a castle and a house. It is right on the coast and whereas Alnwick has original Tintorettos on the wall, this one has a very endearing selection of things put together almost at random. Lots of weapons, miscellaneous furniture, and lots of really lovely porcelain which is very nicely labelled so you can decide if you are going to opt for Meisen or Sevres when you win the lottery. 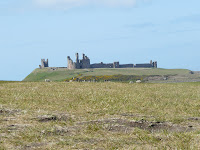 This is Dunstanburgh castle which is a ruin and right on the coast. It is enormous though we didn't go round this one as we have done castle ruins elsewhere and thought we would lie on the grass and soak up the sun instead.

There are lots of other castles too, but we felt a bit castled out after these, and although we would quite like to have seen the castle at Holy Island we had a short time there because of the tides so it was only the Priory that we got to see.
What photos can't show you is the space there. It is a place where you can stretch out and not feel you are hitting the walls.
Posted by Helen at 7:21 PM 3 comments: 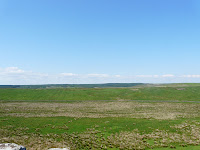 This is the view from Housesteads Fort on Hadrian's Wall. The panorama is absolutely stunning and you can imagine a lonely Roman soldier loooking out over the miles of forest and hills waiting for the hostile and barbarian Picts to come charging in for the attack. We went along Hadrian's wall on a hot, sunny June day, so the Roman soldier would have been happy with the weather, a break from the cold northern winds, grey skies and endless rain, but the locals were mostly hostile this far north, although there were local villages attached to most of the forts where the local traders and other lived. 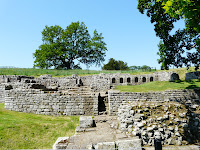 This is Chesters fort which is the most complete cavalry barracks left. This view is from the river up towards the bath houses. Each fort had latrines which drained into the river, bath houses with hypocausts - ie modern bathrooms. Pretty neat really. In fact the bathhouses may have been better than the very odd shower in the first cottage we stayed in.
The shower was one of those with a tap adapter, but no wall attachment, so that when you moved the height of the shower it got VERY hot or cold suddenly, so washing my hair turned into a two person job with B acting as the shower holder. We got the hang of it by the end of the week when we were leaving. 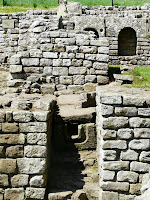 This is some of the drainage from the latrines and bathroom. You have to think that there will be very little of our drain systems in 2000 years. The London sewers were built in the 1850s and are already in a dire state in some places and in real need of some of the drains being completely replaced. At the time they were the pinnacle of engineering and Bazelgette, who designed them, was a genius in the way he got the gravity feeds to work over such a large area to drain the system towards the rivers. Yet the Romans had done it all way before and the system lasted much,much longer. We still don't know how they did all the things they did do which I find astonishing. 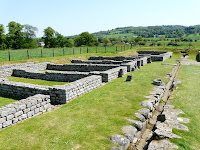 And finally these are some of the barracks. Each soldier had one of these rooms which are actually pretty spacious. I was surprised how roomy they actually were . The rooms faced each other over a colonaded central area with a drain running down the middle.


We had a fascinating day looking at the remains at Hadrian's wall and although we didn't get to Vindolana which is the other one we really wanted to see we still saw a lot, and it was one of the things on my list of things to see in Northumberland.

We had a brilliant holiday, and I saw lots of things in Northumberland that I really did want to see, so I shall roll them out to you in installments, sharing them gradually, as we saw them on holiday.
Posted by Helen at 8:17 PM 1 comment: